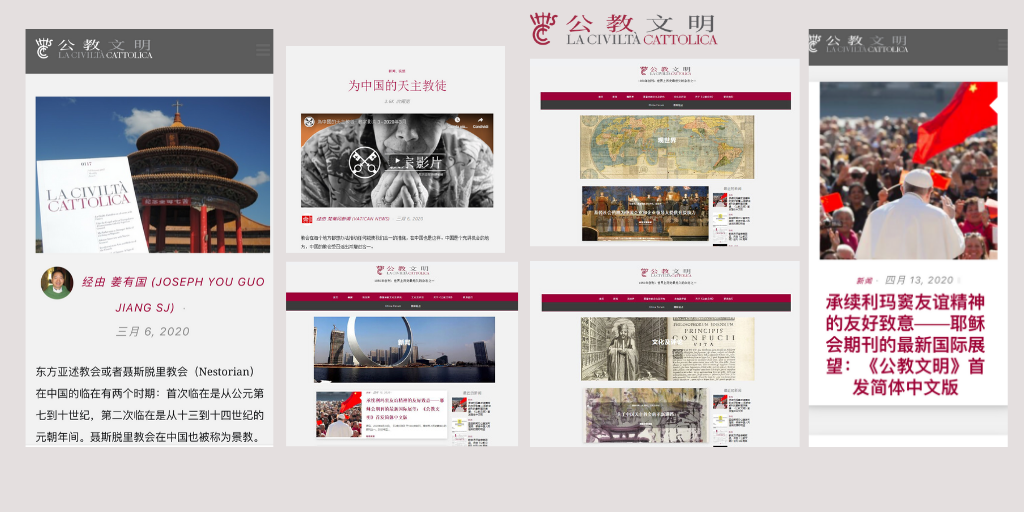 On April 20, 2020, the Jesuit journal, La Civiltà Cattolica (公教文明), has launched a new edition in simplified Chinese on the occasion of its 170th anniversary, featuring a new Chinese website and WeChat account. Read below for the full press release.

The Beijing Center (TBC), as the Jesuit center and intellectual hub in Mainland China promoting mutual understanding between China and other cultures, is very excited for the launch of the Chinese edition of La Civiltà Cattolica (公教文明).

TBC has partnered with La Civiltà Cattolica to create and manage their public WeChat account (ID gjwm1850) in an effort to share their articles with Chinese readers. In June 2019, TBC hosted Fr. Antonio Spadaro, SJ, Director of La Civiltà Cattolica to Beijing and in October 2019 hosted China Forum – the first forum event held in Mainland China.

A gesture of friendship in the spirit of Matteo Ricci

In the recent international perspective of the journal of the Jesuits, a new edition in simplified Chinese is launched.

Rome, 20 April 2020. La Civiltà Cattolica (公教文明) founded in 1850 – and so one of the oldest journals in the world – has decided to launch a new edition in simplified Chinese on the occasion of its 170th anniversary. This initiative is also offered as a gesture of friendship given the increasingly important role that Chinese plays in our contemporary world within the global context.

The Secretary of State of the Holy See, Cardinal Pietro Parolin, in a letter to the Director, Fr. Anthony Spadaro, S.J. praised this initiative which intends to «write a new chapter – fruit of the friendly encounter with the rich tradition of the Chinese people.» This corresponds, he wrote, with the «particular vocation» of the review which is «to build bridges and to establish dialogue with all people.» The Cardinal continued: «Therefore, I can only express from the depths of my heart my warmest best wishes and the fervent hope that your review in the Chinese language might become a solid instrument of mutual cultural and scientific enrichment.»

The journal, Italian before the unity of Italy, has always enjoyed a very intimate and special relationship with the Holy See and Roman Pontiffs, promoting the dialogue between the Christian faith and contemporary culture with patience and respect. And it was precisely Pope Francis who gave La Civiltà Cattolica the model of Matteo Ricci (1552-1610) or Li Madou (利玛窦) as he was known in China. This Jesuit – who from Macerata in the Marche italian Region moved to China at thirty years old, drafted a huge Map of the world, which served to create a wider understanding of the world, and to connect the Chinese people with other civilizations. In a divided world such as our own, it is an ideal image of the harmony of a land at peace. Thus, our review desires to be in its own way a Map of the world, connecting cultures and civilizations.

In 1601, Matteo Ricci also composed a treatise on friendship. That text offered an opportunity for the Mandarin Chinese and the «literati» of the Ming Dynasty, to know the thinking of the great philosophers of the West; but for the Jesuits and for the great scholars within Western culture it also offered the foundation for dialogue with the great intellectuals of China. European cultures have learned much from this great culture and from the wisdom of the Chinese, thanks to the study and the passion of the Jesuits. For this reason, this review of the Jesuits desired to begin a Chinese edition.

The website address is https://www.gjwm.org. Also available as redirect are:  http://www.gongjiaowenming.org and http://cn.laciviltacattolica.org The website is sub-divided in four sections: News (新闻);  World (观世界); Christian Reflection (基督教文化研究); and Culture (文化及评论).