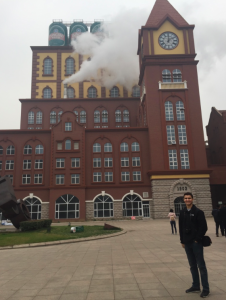 My friends and I really have a knack for planning trips less than 24 hours before we want to leave. But hey, they sometime seem to all workout. This weekend, we decided to visit Qingdao, a city on the coast of China, and located in the Shandong province.

Each province in China seems to have a cultural identity associated with it, and each province is also known for a specific type of food, which makes for different experiences when we try to travel around the country. We arrived via a 5 hour bullet train, lucky for me, I was sandwiched between my two friends instead of some random men.

I was honestly surprised at how nice and accommodating the people of the city were. From what I gathered, the city isn’t exactly a booming tourist attraction, especially during the winter time. This lady we met basically told us we had to come back when it was warm. Regardless, as soon as we walked out of the train station, we had police officers trying to hail us cabs and giving us pointers on how to get to our hostel. We got in at around 10:30, and I swear, the whole city was asleep. We ended up walking down a street, and a woman waved us into her restaurant, probably one of the whole 3 open that night.

I love the little mom and pop shops, and this one was no different. My favorite thing to do is to ask the shopowners what food they recommend because alas, all our Chinese combined still is not enough to read entire menus. Since Qingdao is on the sea, we were able to eat some delicious prawns, and oysters, and shrimp. We were also treated to some delicious “water dumplings” basically boiled dumplings that are a different twist to what we get in Beijing. There were also some nice young men sitting the restaurant that spoke English fairly well, so we befriended them. The shop owner kept asking asking them where we were from because she said she noticed that we really liked to eat vegetables.

TsingTao, the popular beer that is brewed right here in China, is based out of Qingdao (if you have any knowledge of chinese, they are actually pronounced the same). We spent the morning touring the beer factory, which is kind of interesting because the town was built by the Germans, so many of our snapchats looked like we were straight out of Germany. It’s interesting culture because they do this weird thing where they sell beer in a bag, so you can literally get a plastic grocery bag filled with beer for like 10 kuai (1/6th of a dollar).

We spent the rest of the day walking by the ocean, though it was very foggy and cold so obviously we could not swim. It’s a coastal town so there is a lot of cool little shops and stands that sell seafood.At night, we went to the same area of the Beer Factory, except it had transformed into a night market. We tried a variety of street food including Chinese cream puffs.

While it was a short vacation, I’m so glad we went. China is very diverse like the United States, so hitting up different areas of China is eyeopening and rewarding. 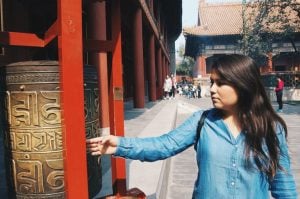