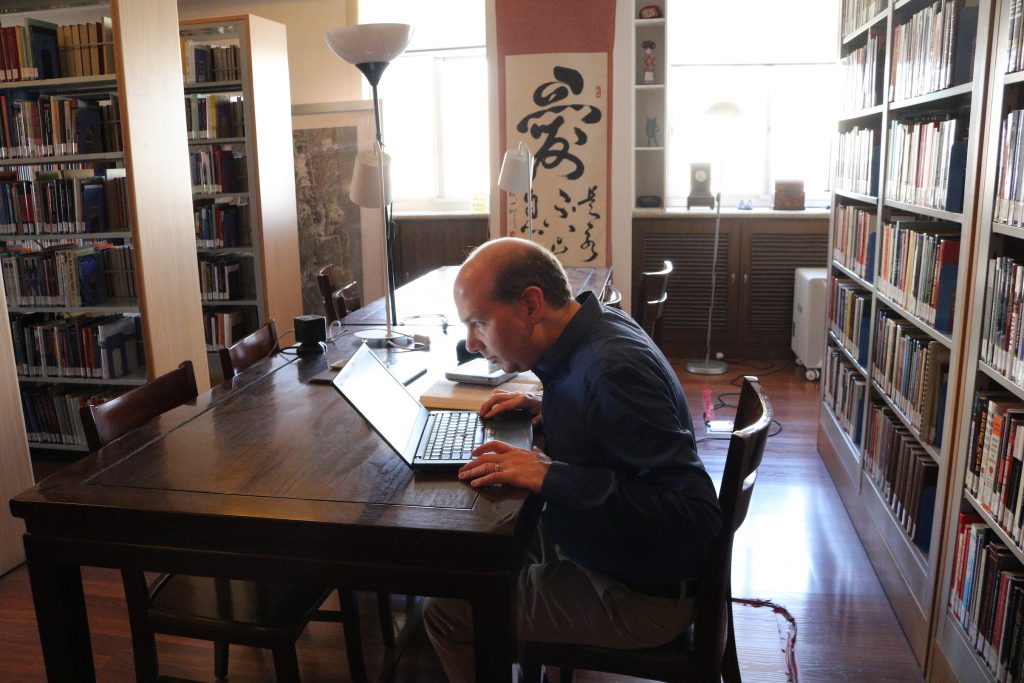 Michael Schuman is a journalist and author who has lived and worked in Asia since 1996. His new book is his third about Asia. The earlier works are “Confucius and the World He Created” (Basic Book, 2015) and “The Miracle: The Epic Story of Asia’s Quest for Wealth” (HarperBusiness, 2009). Mr. Schuman has been a correspondent for The Wall Street Journal and Time magazine. He currently is a contributor to The Atlantic, Bloomberg Opinion, and other publications. He has a Master in International Affairs from Columbia University and a Bachelor of Arts from the University of Pennsylvania.

On June 2, 2020, we had the opportunity to speak with American journalist and TBC friend, Michael Schuman. Schuman’s latest publication – Superpower Interrupted: The Chinese History of the World – comes at an opportune time. As the pandemic is altering the world and its history, discussing and learning about China’s global power and growth is more important than ever before. Throughout his book and our discussion, Schuman recognized the dichotomy of perspectives on a culture’s history, as it pertains to one’s own perception, values, and accessible knowledge. China being a greatly misunderstood and unlearned country, Schuman offers a historical commentary on China’s past, present, and future. In his intention with the book, Schuman presents a major distinction, on how the world views China and its history versus how the Chinese view China and its history, that guides readers to a sensible perspective on China, not apparent from their scope of the world.

With 16 years as a journalist in Asia, Schuman’s wealth of knowledge is embedded in his professional and published works and made for an insightful discussion on the fruition of his book and his research process at TBC’s Anton Library. Schuman has been conducting his research at the Anton Library for all of his publications on Asia.

TBC: What is the targeted audience of your books? What insights do you hope readers will gain from your latest book?

MS: My books are targeted at readers who are not experts on Asia or China and want to know more about their history and culture. I try to make my books clear and easy to read, with lots of stories and interesting narratives to bring my subjects to life and take them out of academic discourse to a wider audience. I hope people who read this book will come away with a better understanding of how the Chinese feel, i.e. a better idea of how the Chinese see their role in the world today, and why the Chinese do what they do in the world today. Xi Jinping talks about the Chinese Dream – what is it? To a great degree, it is a return to a great China, a return to a China that was a great power in the past. Xi presents a rising China in this historical context, connecting China today to China’s past. So, I think if you understand how the Chinese see themselves today in relation to their own history, then I hope that helps people around the world (London, Berlin, etc.) to understand how to deal with China.

TBC: What inspired or motivated you to write about Chinese history from this angle – in which you answer and acknowledge what China wants, its power, and its world presence?

MS: I think it is natural for everybody, wherever they are, whether you are sitting in America, or Europe or Japan, that you tend to see the world from your own perspective, and you tend to, when you are in school, get a certain historical narrative that is connected to who you are and where you live. But the historical narrative you get when you are sitting in New York City or Macedonia, is not the same as the narrative that other people learn. I find that this creates a situation where everybody sees the world, and the history of the world, through a certain prism. That to a certain extent is distorting, because everyone is looking through their own prism. They tend to know China only in the story of the Rise of the West. I find that when I talk to people in this book and even in the US, they tend to know China from the Opium Wars (1840s). By the standard of Chinese history, this is basically like yesterday, when you have such a long history. And maybe people have a vague knowledge of the emperors and dynasties, but there is very little knowledge for China entering into the Western historical narrative, which is based entirely on the Rise of the West. So, this got me thinking, that a place like China has this whole other historical narrative that the Chinese know about themselves, that a lot of other people around the world don’t know. And if you know this history, the China sitting in the world today, makes a lot more sense. That is where the idea of the book came from; to introduce readers who are not familiar with this narrative, and hopefully from there, influence how people think of current events and those coming in the future. To understand the role the Chinese have had in the world, as well as, how the Chinese have perceived their role in the world – which are not always the same thing. Then you can get an idea of where China is going and its ambitions.

TBC: How is your narration/presentation of Chinese history different from those found in other historically charged books on China?

MS: There are two differences: other historians’ style is ponderous in tone, while mine is more like story-telling and informal; also, very focused history, not general history – it has the backbone so you can follow events. The theme is focused on China’s role in the world and how they see their role in the world – it is hyper-focused on certain narratives of Chinese history. It does have Chinese history and how the dynasties work, but my book is entirely about China in the world.

TBC: At the beginning of your book, you chronologically map out the various Chinese dynasties and historical figures. How will these highlights guide readers into better understanding the historical perspectives presented in the book?

MS: From writing the book on Confucius, I learned that people who had read it, told me it was very hard to keep track of the dynasties, and in that book, the history wasn’t chronological. So, throwing a lot of names and places at readers (who are not familiar with), it can be hard to follow. So, along with my editor, we decided to include a glossary to help people, serve as their reference guide, to focus on the content of the book and not be focused on researching the who and where.

TBC: You mention that Chinese historians ‘have a way to color circumstances with an ideological brush,’ where analytical proceedings are squeezed into pre-conceived notions of how the world should work. Do you see or believe this to be the approach of historians in how they discuss their own country’s history?

MS: Along the way, you start to get into some issues of how to define China. The people who used to live here in the Han dynasty did not understand themselves as the Chinese do today, which is why you get into a rabbit hole. And a way to deal with this, as I mentioned in the book, is to not deal with it. So, in a way you are stuck following how the Chinese see their own history. The more dangerous rabbit hole was ‘what is the Chinese view of history?’ because history, to a great degree is what you make of it, and it gets re-interpreted. So, the way a Chinese historian today would interpret an event has little resemblance to how a Chinese historian would have done so 100 or 1000 years ago. And then you also get into the issues of the purposeful re-writing of history, to suit ideological or political needs, something that is going on here now, in ways that is problematic. I didn’t want to write a communist perspective of history, because the government and educational system here already present a certain perspective, which is not necessarily the same to what Chinese historians would have done in the past. So, the only way I found was the best way to go about this, was to listen to Chinese writers as they were writing about their own events. So that means going back to the very early writing, to see what the Chinese were writing about these different people, places, and the world. So, you get something like a real-time view.

TBC: You posed the question “What Does China Want?” in your book. What was the process like in answering that question for your readers’ understanding of where China is and where it’s going?

MS: You can see the Chinese today, link their current situation to their own history. And they talk about their 5,000-year-old history, and they are very conscious of the role in the world that China has traditionally played. By trying to answer the question ‘What Does China Want?’ I think it is important to look not just forward, but backwards, to understand where China’s historical narrative has taken China, how the Chinese see the world today, and what they want in the future. As mentioned in my book, China wants what it has always wanted or what the Chinese think they always had, so then if you understand China’s role in the world in the past and the Chinese’s view of their role in the world, then a lot of what is going on today starts to fall into place.