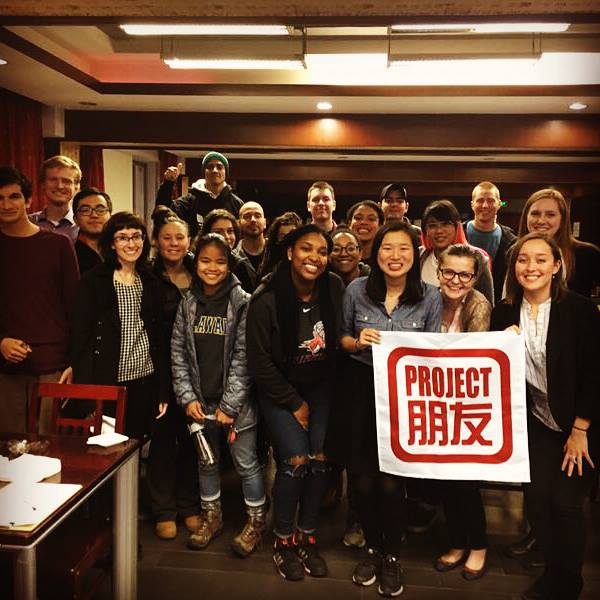 It was never my intention to work for a non-profit company in China. I did not speak a word of Chinese, I didn’t know anything about the culture, let alone the business practices, and I did not want to add overworked intern to my list of epithets. It was series of happy accidents that led to my semester at Project Pengyou, and I am eternally grateful the universe gave me that gentle shove into the unknown. I had very few, but very false, notions of how a Chinese company would operate. I pictured a warehouse of cubicles, with everyone working silently. I imagined being thrown into this terrifying scenario with no way to communicate, fully expecting to be taken advantage of. Instead, I walked through twisting grey alley after alley to find myself in a courtyard flooded with light. There was traditional Chinese decorative art all around, and beautiful wood carved windowpanes. The office had only two women that day, both American. They were professional and intelligent, speaking Chinese fluently with ease. I was awe struck. They explained how China had affected them both so deeply, and how they wanted to find a way to share their passion with the next generation of Sino-US bridge builders. I was hooked instantly. The inherent value of this opportunity to work abroad only increased my desire to succeed. As “the pressure of globalization in the 21st century demand professionals with new competencies, among them the ability to work collaboratively and communicate effectively across national boundaries and cultural differences” (Rubaii, 179), I relished the chance to become one of these diversified, essential professionals. I wanted to impress these women who had made their lives here. I wanted to emulate the same ease and comfort in China they seemed to have. I wanted to inspire people to embrace the same journey I was beginning, and this all began with my internship at Project Pengyou. 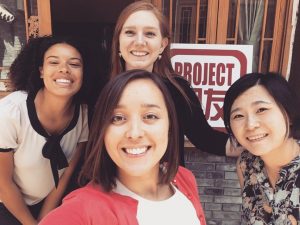 My newfound passion for the mission of improving relations and eliminating misconceptions concerning China turned out to be its own downfall. I eagerly accepted all work I could get, searching daily for any articles, events, jobs, or scholarships that would interest people in the amazing world I had stumbled upon in Beijing. I spent hours in the beautiful office, and then even more time researching after I returned home. I found after a few weeks that my enthusiasm was not sustainable. My Chinese courses got more and more difficult, and I was falling behind in the research project that I came to China to complete. I was so intimidated by the powerful, impressive women I worked with, and I didn’t know how to explain that I had bit off more than I could chew. While I originally believed it would be my lack of Chinese knowledge that would lead to me being taken advantage of in the workplace, it was actually a fear of using my own language that overwhelmed me. I had to learn the nuances of working in such a foreign environment. There were entirely new rules here. The work ethic was different, even the hours and interactions of an office had changed. Chinese technology, such as WeChat, makes business 24 hours a day 7 hours a week. I was always reachable; it was expected that all work would be done instantly. Beijing is fast and innovative, and you are quickly left behind if you do not keep pace. My time with Project Pengyou became a precarious balancing act as I attempted to learn a new language, live in a foreign country, study, and work. I was handed an unbelievable amount of independence, but success in this environment demanded intense organization and attention to detail.

Living abroad is almost like living in two universes on different sides of the world. I had to keep in touch with my friends, family, and my previous life, all taking place life 12 hours in the past of my current reality. I had to read the news of both China and the U.S., trying to find the different levels of bias each source leveled against the “other”. I had to reframe every piece of my life to keep my parents satisfied, to explain to my friends how integral China had become to my identity, and then, within my work, to encourage students and potential bridge builders to embrace the world I was in.

China can be intense and difficult, and some days it feels like it may break you, but “no one who seriously examines contemporary China can ignore the quality and diversity of ideas developed and argued there” (Fewsmith, 4). I felt like one of these ideas at times, attempted to form opinions and enjoy and explore in one of the most complicated environments I have ever lived in. I cannot thank China enough for the developing I have done in my short, 5 months here. I have learned that I am capable of traveling alone, and surprised even myself with the amount of organization and self-sufficiency I was forced to draw on in these experiences. I have learned I can interact and enjoy professional gatherings, and communicate with individuals with so many qualifications they terrify me. I have had to overcome so many fears in China, and I have grown professionally, emotionally, and physically for it. 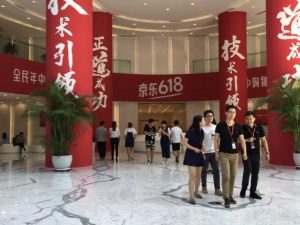 ABOUT MY INTERNSHIP AT MIGRANT CHILDREN'S FOUNDATION 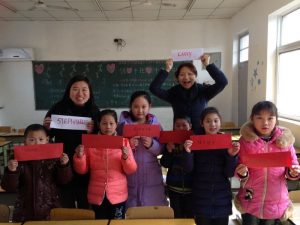 Want an internship? Check out the vacancies Learn More