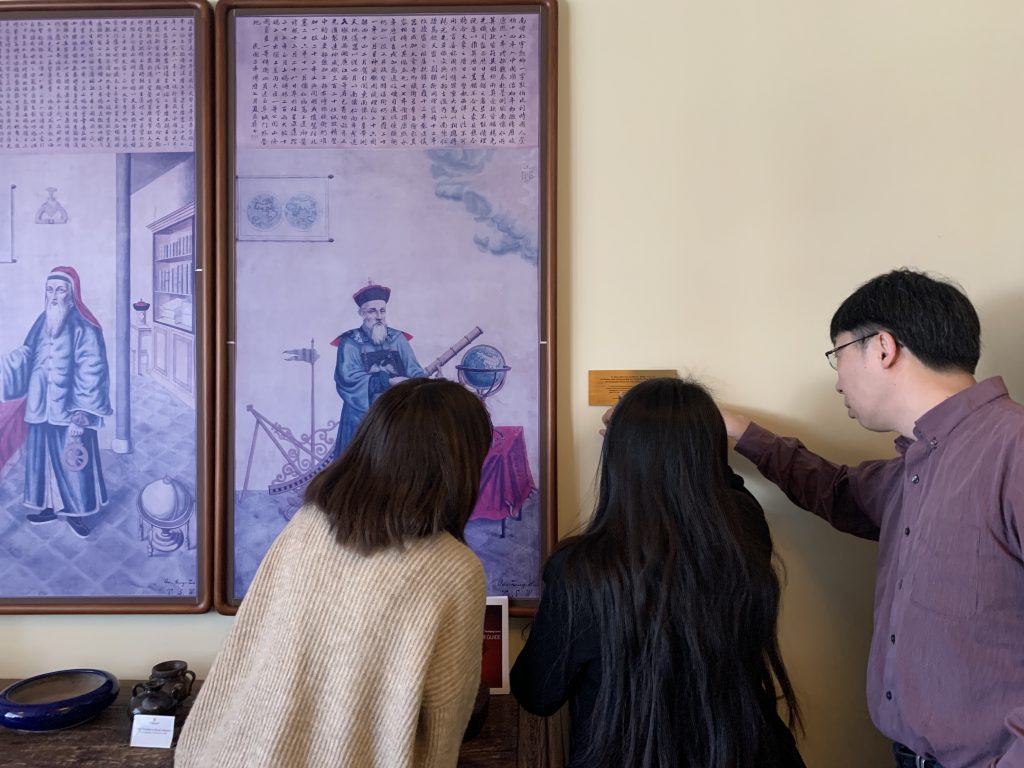 How Tombstones are Helping Uncover the Jesuits’ History in China

As an international academic institution with a Jesuit spirit, TBC is actively welcoming inspired and knowledgeable authors, business professionals, and scholars. On January 7, 2021, we had the pleasure of welcoming Chinese author and academic, Dr. Chen Xinyu. Formally educated at Renmin University of China and Sapienza University of Rome, Dr. Chen is currently engaged in the comparison of Chinese and Western philosophy and the archaeological study of Chinese and foreign tombs at the Beijing Administration Institute.

We can learn about the depth of Chinese culture and its engagement with other cultures through local historical landmarks that are increasingly telling of past history through their discovery and study. We became humbly reminded of this guiding thought during our time with Dr. Chen, as her expertise on tombstones gives insight into the Jesuits’ history and presence in China since their arrival. According to Dr. Chen, most of the tombstones in China belong to the Jesuits, but there are other know tombstones also belonging to missionaries from different orders, such as those from the Congregation of the Mission.

However, we can’t speak of the Jesuits’ history and their existing tombstones without acknowledging Matteo Ricci’s status and legacy as the first foreigner to have a tomb in China – which ironically calls a Communist Party School, home. When asked about Ricci, Dr. Chen didn’t hesitate to recognize his importance for the Jesuits. It seems, previously, all the foreign missionaries that died in China could only be buried in Macao, making Ricci the first foreign Jesuit missionary to be buried in China. His initial burial location is also indicative of the historical and cultural progression taking place in China. Decades before 1954, Catholics had land ownership of Ricci’s burial place – the Zhalan Cemetery. However, at the time of his death in 1610, the land was owned by the emperor. In recognition of Ricci’s contributions to China, a request was made and approved for his burial at Zhalan Cemetery, on the grounds of what is still the Communist Party School (now known as the Beijing Administrative College).

Having authored over 30 papers and accumulated a wealth of knowledge on the history and inscriptions of the Zhalan Cemetery (The Matteo Ricci Cemetery) tombstones, Dr. Chen has taken the initiative to uncover lost tombstones that are piecing together the Jesuits’ history in China. Having faced some resistance in her archeological pursuit of tombstones, Dr. Chen has spent the last six years compiling the catalog of Jesuit tombstones and their interpreted inscriptions into her most recent publication, The History of Tombstones. When asked about her research process, Dr. Chen recalled her discussion with Jesuit Fathers at Zhalan Cemetery (previously a Jesuit seminary), who have a vivid memory of the tombstones’ lifespan. The Fathers recounted a painful moment in history. They explained the destruction and reconstruction of the tombstones during the Boxer Rebellion and the church’s demolition at Zhalan Cemetery during the Cultural Revolution. After the rebuilding of the church, the uncovered tombstones became an outer wall.

Dr. Chen’s discovery and analysis of Jesuit tombstones also speak to the restrictive nature of imperial rule during the Chinese dynasties. As told by Dr. Chen, during the Qing dynasty, many Jesuits were high ranking officials in service of the emperor, so upon their passing, their respective tombstone inscriptions had to be approved by the imperial court. This enforced language control, which prompted layered inscriptions on the tombstones in Latin and Chinese. During those times, few people could understand Latin so language control on the respective tombstones, was limited. For this reason, the inscriptions in Latin dictate a more negative connotation compared to the tailored description offered in Chinese. The difference in language can be seen in Dr. Chen’s book, where the Latin and Chinese inscriptions (even Manchurian for missionaries’ tombstones) are compared side-by-side. “For example, the tombstone inscription for Johann Adam Schall von Bell contains two inscriptions – on the ‘yin’ and ‘yang’ of the tombstone. Upon his death in prison, Bell’s inscription was not allowed since he was a criminal, so the ‘yin’ side of the tombstone is in Latin and Chinese. Years later, the emperor recovered his tombstone and re-inscribed it on the ‘yang’ side. ” History is buried in Bell’s tombstone because he was a criminal when the initial inscription was made. After it got reclaimed, it was re-inscribed; this recollection shows the inscriptions’ complexity, as each inscription differs in language and content.

Although Dr. Chen presents carefully collated information on discovered tombstones in her book, during our discussion, she made it clear that she continues to find new tombstones and believes there are many more out there waiting to be resurrected and restored. With the English edition of The History of Tombstones coming out in two years and her dedication to research, we anticipate Dr. Chen will soon uncover another part of Chinese and Jesuit history.